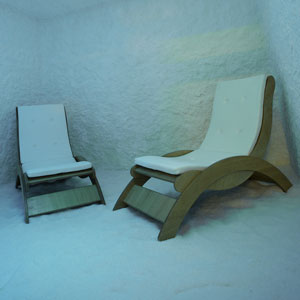 The benefits of salt are known since the ancient times; just think of its role in food preservation thanks to its antimicrobial action.
Its benefits on humans were discovered in the mid-19th century, when a Polish physician, Dr. Felix Boczkowski investigated the connection between the good health conditions of people working in salt mines and their working environment.
In 1843, Dr. Boczkowski decided to investigate further claims and theories that had never been confirmed by any study before. He found out that the beneficial effects of the mines were due to trace elements found in the environment and to their concentration, temperature and humidity. Thus, he created the “halotherapy” (from “halos”, the Greek for “salt”): a very simple, natural, non-invasive method that, by means of the inhalation of a dry saline aerosol, heals the upper and lower airways.

Today, with the advancement of technology, we have developed a certified medical device capable of reproducing, in different environments, the perfect microclimate to get the best beneficial properties of salt.

The amount of salt used is part of the certified medical system and the manufacturing and packaging process is patented.

Such amount of salt is micronized, controlled and packed in special vacuum-sealed bags to ensure its properties, in the company’s in-house laboratory, unlike other systems, in which salt is micronized and ground directly in the diffuser, thus preventing a controlled dosage.

In order to safeguard the user’s health, the salt used for the dose preparation has the highest degree of purity (RG According to Ph Eur Current Edition), comparable to sodium chloride used in saline solutions for cleansing.